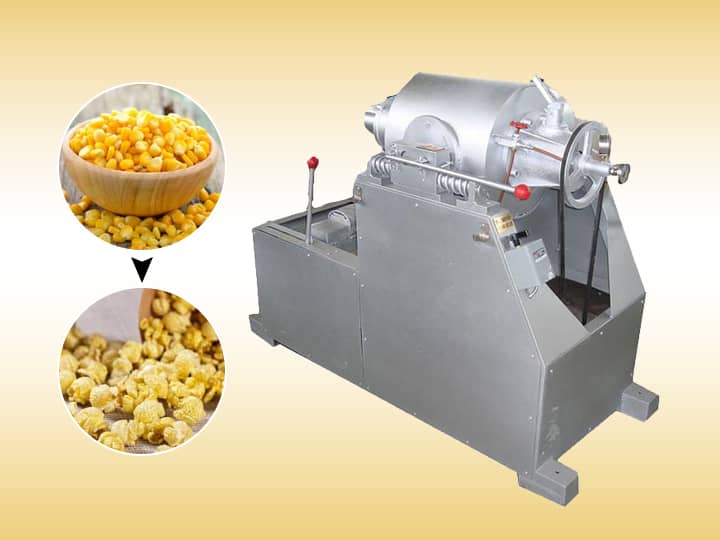 Airflow cereal puffing machine could process cereal bar, including peanut candy bar, rice cake, corn cake, and other grain bars. The machine is easy to operate, workers could learn to use it in a short time. And the food bulking machine has a large capacity, suitable for a cereal bar production plant. Customers could also customize an airflow cereal puffing machine, or match it with other machines to form a peanut candy bar production line.

A cereal bar is a well-known snack. The snack is sweet and delicious and has the fragrance of rice and other grains. This snack is mainly made with grains, like glutinous rice, wheat, and white sugar.

The rice-making process first involves steaming the glutinous rice, drying it to make it the original rice grains, then mixing each 5 kg of glutinous rice with 200 grams of malt sugar into water, baking it in a pot, and then frying it with sand. At this time, 1 grain of rice can grow to the size of 4 grains of rice (fried with lard or vegetables has the same effect, in order to save fat, usually use sand and stir fry), and then use saccharin, white sugar, and caramel to make syrup. Pour the rice into the syrup, add a little peanut kernel, mix well in the pot, pour it into the top box, knead it into cubes, and then cut into small pieces with a knife to prepare the product.

The airflow cereal puffing machine uses mechanical energy to convert heat energy. Usually, the unequal-distance non-standard screw system of the grain popping machine uses for extrusion. And the gas in the material discharges and quickly fills with the material. The material is subjected to the shearing force to produce backflow, which increases the pressure in the machine chamber. And then at the same time, the mechanical energy converts into heat energy through the friction of the material in the chamber so that the material becomes a gel state with flowing properties.

When the material is squeezed into the outlet, the pressure changes from high pressure to normal pressure instantaneously. And from high temperature to normal temperature instantaneously, causing water to quickly evaporate from the tissue structure. With the friction between the stack and the chamber, the materials fully mix, squeeze, heat, glue, and gelatinize to produce organizational changes. The original structure will destroy, and numerous microporous structures form inside. Then through the cutting device, the puffed food is formed by cutting and cooling.

The grain popping machine could apply to many kinds of cereal, like barley, wheat, rice, corn, grain, peanut, millet, and other nuts.

This food bulking machine could process 8 to 10 kg raw materials per time.

It only takes 8 minutes to heat every time.

The grain popping machine could process 50 to 70 kg products per hour.

The physical strength of the operator is lower because there is no need to open the cover manually, women and older persons can operate it.

Operational technical requirements are lower, and beginners can learn it in 2 days. More labor-saving, one person can operate 5-8 stations (you need to be more skilled when watching multiple stations).

30% energy saving. Using exhaust heat to heat the air, the mixed combustion of heated air and liquefied gas can save energy (about 15 cubic meters of air is required for 1 kg of liquefied gas to burn).

The automatic air puffing machine can equip with a sound-absorbing device, and the puffing sound interference is minimal.